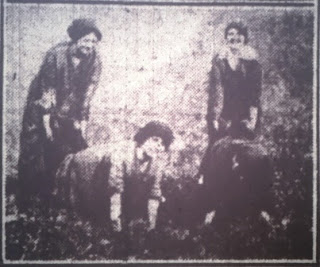 Saturday 12th August 1916: Following the recent strike by Luton munitions’ girls a conference has been held in London to consider their rate of pay, attended by the Beds Engineering Employers’ Association, three of the girls, and Mr Harry White of the Workers’ Union. An increase of a penny an hour had been under consideration, but the firm concerned has now received the agreement of the Ministry of Munitions to a new wage scale under which the bonus system has been withdrawn and the following flat rates of pay introduced: 3¼ to 4d per hour for girls under 16; 3½ to 5¼d per hour for those ages between 16 and 17; 4 to 5¼d per hour for those between 17 and 18, and 4½ to 6d for those aged over 18. However there was still dissatisfaction and the original application for a penny per hour increase was submitted to the Employers’ Association. It was argued that the girls were still earning less than girls employed at other works in the town, and that many came from a distance and had to pay for expensive lodgings, or came by train and had to pay fares out of their wages. The firm was still not prepared to make any concessions, and refused to consider paying a bonus in addition to the current rates. The Workers’ Union now intends to send the application to the Central Conference due to be held at York in September.

Some of the Luton girls are also annoyed by the reference in a recent Hatters Gazette article to “pampered munitions workers”. One writes:

“If more girls turned round and went to munition work the boys in the trenches would not have to wait for shots … Where would any of us be if there were no munition workers? They have certainly done their bit, so from my point of view they ought to have a holiday more than the straw work girls, for many of the latter don’t think of turning out of bed before nine o’clock, while the shell girls are up and at it a long time before that. And they enjoy themselves too. Look at the small photo and see them enjoying half-an-hour’s recreation before working. As for being overpaid the girls have to earn it before they get it, but I think some of the girls have a jolly sight more pluck that some of the men. Anyway they don’t mind waiting until the war is over before they think of taking a holiday, although they well deserve a rest.”