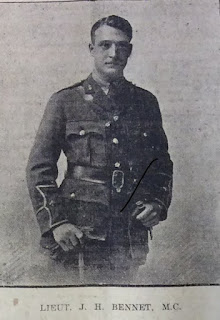 Friday 18th August: Second Lieutenant J. H Bennet, of the Royal Munster Fusiliers, met a remarkable escape from death while fighting in France. Three weeks ago his parents, of Campbell Road, Bedford, received a letter from their son stating that he had been shot through his tunic. Last Friday, Mr and Mrs Bennet received a parcel from their son containing his gold-rimmed glasses and glasses case, which he kept in his pocket. A shrapnel bullet had lodged into the case, jamming it closed. The case saved Lieutenant Bennet’s life.

On Tuesday, news was received that Lieutenant Bennet had been awarded the Military Cross for gallantry on the battlefield on the 15th July, around the time when he wrote to say he had been shot. Bennet attended Bedford Modern School and joined-up with the Universities and Public School Battalion before getting a commission in the Royal Munsters.