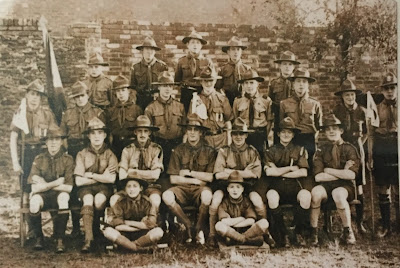 Wednesday 9th August 1916: A group of Boy Scouts from the Leighton Buzzard Troop have enjoyed a few days camping at Liscombe in a field lent by Mr. E. W. Robinson. They marched  on Saturday afternoon from their Headquarters to Liscombe under the charge of Patrol Leader F. Groom. They were joined there by Assistant Scoutmaster Jack Robinson and enjoyed a game of cricket. Each morning the boys rose at 5.45am after going to bed at 10pm. Sunday was a quiet day, then on Monday they helped their host with hay-making and enjoyed a tea provided by Mr. and Mrs Robinson in the hay field. Each Scout was given an egg for Tuesday’s breakfast and his water bottle was filled with milk each day.

The boys were given plenty of opportunity to practice their scouting skills. On Saturday night Assistant Scoutmaster Eric Linney tried to creep into the camp unobserved but was spotted by the sentry. On Monday the Scouts foiled an attack on their camp by some local volunteers, but on their return found their tent down and clothing and other items missing. As a result they spent the night in Liscombe House; the missing items were found the next morning in another field.