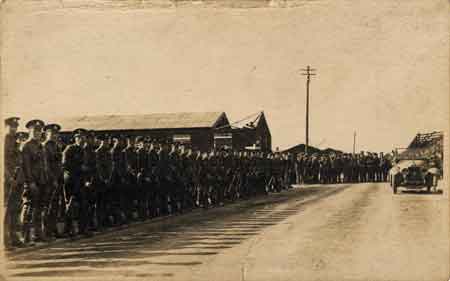 Monday 10th April 1916: Her Highness Princess Victoria Louise of Schleswig-Holstein has today visited Luton in order to perform the opening ceremony for the “Hubbard Hut” provided by the town for the use of the YMCA at Biscot Camp. The Princess reached the town at 1 p.m. and was taken by Lady Wernher to Luton Hoo. By two o’clock the route from the southern end of the town to the top of Biscot Hill was lined with people. On arriving at the camp Her Highness was greeted by a fanfare from the trumpeters of the London R.F.A.  She then passed between a guard of honour and was received by the Mayor and Mayoress. Her Highness wore a heavy black fur coat, with a small ermine wrap at the neck, and a simply cut black silk dress. She had a large green hat trimmed with green ribbon and worn at a slant. Lady Wernher wore a dress of rich mauve cloth with a silk corsage, a sealskin coat, and a distinctive large mauve hat.

The Princess was conducted to the platform within the hut and the National Anthem was sung, before a prayer of dedication was said by the Vicar and a hymn sung. The Mayor gave a speech in which he welcomed the Princess, and praised the efforts which had raised £1500 to provide huts for the YMCA at Folkestone, a scheme successfully launched by a generous gift of £500 from Councillor and Mrs. Hubbard. The success of the fund-raising meant there was enough money to provide another hut at Luton, and Mr. and Mrs. Hubbard’s contribution had been used for this purpose and the total cost of £700 had been raised within a week. A representative of the YMCA responded with his thanks and an explanation of how the hut would be used, providing a place for soldiers to deal with correspondence, to play billiards and other games, and to enjoy concerts and other entertainments. The speeches were followed by a song from Miss Mary Hilliard and Her Highness then declared the hut open, granting permission for it to be known as the Princess Victoria Hut. A vote of thanks was proposed by Lady Wernher and seconded by Colonel Griffiths. Councillor Hubbard was persuaded to make closing remarks before proceedings concluded with another song and a blessing.

Before the Princess left Luton she accepted an invitation from the Mayor to visit the factory of Messrs Vyse, Sons and Company in Bute Street. She was able inspect the modern premises and see all stages of the hat manufacturing process. Her Highness chatted with the girls and expressed herself delighted with everything she saw. She will soon receive the gift of a hat in a design of her own choosing. Her Highness returned to London on the 5.30 p.m. express, which made a special stop at Chiltern Green for her benefit.