Military Goods on the Black Market 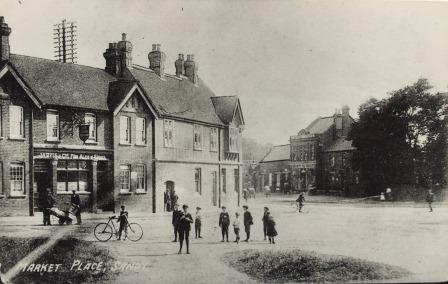 Friday 28th April 1916: Frederick Sawford, a mechanic from Blunham, has appeared at the Biggleswade Petty Sessions on a charge of buying a pair of army issue boots from a soldier. Police Inspector Pedley told the court that on 11th April together with a Sergeant-Major he had been making enquiries into missing property and had called at the Lord Roberts public house. They questioned Mr. Sawford about the boots – which were new - and he stated he had given 8 shillings for them. He claimed the soldier had told him they were no good to him and he had had them for some time; the soldier had also said they were his own and were bought and paid for. Mr. Sawford admitted feeling uneasy about the transaction and now felt it was very foolish. Sergeant-Major Barker identified the boots as army issue, with a value of 21 shillings.

Before making a decision the Magistrates decided to hear a second case in which James Spring, publican of Sandy and licensee of the Lord Roberts, was charged with buying two shirts from a soldier. When Inspector Pedley visited the pub and enquired about the sale of property Mr. Spring had mentioned Frederick Sawford’s purchase of the pair of boots, but at first denied purchasing anything himself. A few minutes later he “remembered” buying two new shirts from a Norfolk Regiment soldier to make up an amount owed to him for beer. Sergeant-Major Barker said a good deal of property had been lost which they could not trace.

This was a first offence for both Frederick Sawford and James Spring; they were both of good character and the Magistrates had received several testimonials on behalf of Sawford. Nevertheless, it was a serious offence and they were determined that this selling of Government property must be stopped. Sawford was fined 10 shillings as it was possible that he was simply buying a pair of boots. Spring’s offence was considered more serious as he was a publican and it was more obvious that the soldier could not have had any legal right to the goods. He was fined £2.