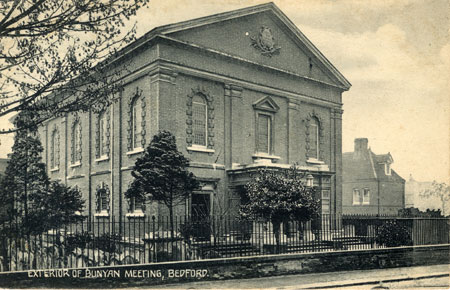 Sunday 2nd April 1916: The Rector of Clophill is not the only minister of religion from Bedfordshire serving as a chaplain at the Front. Rev. W. J. Coates, the minister of Bunyan meeting is with the 6th King’s Shropshire Light Infantry is hoping to return home on leave this month. In a recent letter he describes an amusing encounter with a Scotsman:

“A Y.M.C.A. hut is near our occasional rest billets. Here, at odd moments, I lend a hand with coffee and twist, Woodbines and buttons. Once or twice, we have had a fine service. In the Hut, there exists a little library of books. In comes a braw Scots laddie with a burning question. All we detected was something resembling ‘buns’. ‘Oh, yes,’ said the attendant, ‘We’ve plenty of buns’. The counter was stacked with them. It was nearly an insult. ‘Burrns, Burrn, the works of Burrns’. Collapse of the attendant amid confused apologies, and the assurance that he had heard of the writer before. The Scot had not seen a copy of his national poet for six years. He wanted Burns, not buns, and wanted him badly! He could recite ‘Tam o’Shanter’, he said, by heart, and many another.”