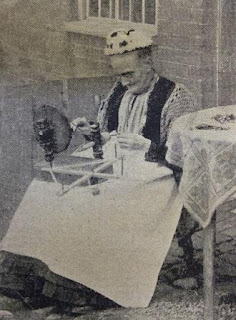 Lacemaker who made handkerchiefs for Queen Alexandra, the Queen of the Belgians, and Queen Amélie of Portugal (by Arthur Augustus Carnes, 1866-1932)

Thursday 20th April 1916: Mr A. A. Carnes of Shaftesbury Avenue, Bedford has secured various royal honours for Bedfordshire’s famous lace industry. He has been granted permission to name handkerchief designs after HM Queen Amélie of Portugal, and also after the Queen of the Belgians, the Princess Royal, Princess Christian, Princess Louise, Princess Beatrice, Princess Maud, Princess Victoria, and Princess Marie Louise. Other handkerchief designs have also been named after Viscountess French and Madame Sarah Bernhardt. These lace designs are all of fine thread work known locally as “12 slip”. It is hoped that local lace workers will realise that this gives them the opportunity to specialise in this fine work instead of continuing to use coarse threads, and will rediscover and pass on their skills in working traditional patterns.

Mr. Carnes has received a number of letters of gratitude and encouragement from the royal ladies. Princess Christian wrote that “it was most important to encourage and help this long established industry” and said she would be glad to bring it to others’ attention. HRH Princess Louise not only gratefully accepted the handkerchief sent her and was pleased to have it named after her, but chose a second and gave permission to have her name associated with both. Madame Sarah Bernhardt’s acknowledgment read “Je voue remercie pour votre mouchoir charmant et j’accepte avec plaisir que vous le donniez mon nom”.

In 1913 HM Queen Alexandra accepted a photograph of twelve old Bedfordshire lace workers, all over 80 years old and still engaged on lace making. The Queen had the photograph hung in her own room and sent a gracious message wishing “these clever, industrious old ladies every possible happiness in their declining years”. It is believed that lacemaking was introduced to Bedfordshire by Queen Katherine of Aragon during her time at Ampthill. After a prosperous time under the Stuarts the industry declined but was revived in the reign of Queen Victoria, with local work winning many honours at Exhibitions. In recent years poor designs and inferior quality lace has caused much harm, but there are now persistent efforts to revive the old designs. This art was kept alive mainly by village lace schools, where children began to learn the skill at the age of five. Bedfordshire lace is worked in one piece, both in the point and the designs connected by legs, which makes it particularly durable.  Source: Bedfordshire Times, 21st April 1916
Posted by Kathryn at 07:00