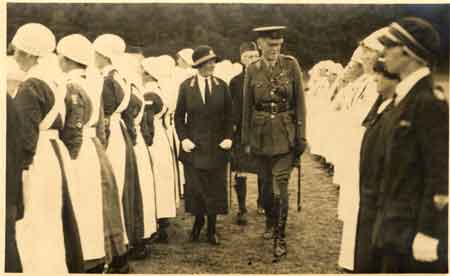 Friday 12th November 1915: The Red Cross Hospital which opened at Grovebury Road, Leighton Buzzard on 23rd August has temporarily closed following the departure of the Royal Field Artillery for Ripon. In the two and a half months it was in operation it treated fifty four patients. These include both cases of sickness and those hurt in riding accidents at the Artillery School in Page’s Park. For much of this time the hospital operated with only a small number of nurses from the 18th Bedfordshire Voluntary Aid Detachment.  Fortunately by kind permission of Mrs. Leopold de Rothschild they were assisted by members of the 12th Buckinghamshire Voluntary Aid Detachment, the Linslade and Wing Branch of the St. John Ambulance Association. The Leighton Buzzard Red Cross detachment has now been asked to accommodate fifty wounded soldiers. They are hoping to be able to accept at least part of this number if they can get local help.