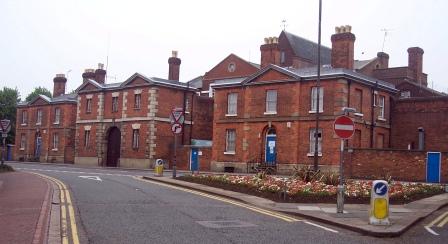 Tuesday 16th November 1915: William Benjamin Reeve of Leighton Buzzard, who was found guilty last month of murdering his wife, was executed at Bedford Gaol at 8 o’clock this morning. The time between sentencing and execution was slightly longer than is usual as a fruitless appeal was made on the grounds that the Judge had misdirected the jury. During this time Reeve was an exemplary prisoner, facing the prospect of his terrible end manfully. He suffered greatly from the wound made when he cut his own throat with a razor, which caused him both pain and physical weakness, but made no complaint. He was visited daily by the Prison Chaplain, allowed to write letters, to converse with the warders, and to receive visitors. These included his parents, two married sisters, his brother George (the bandmaster of the Salvation Army in Leighton Buzzard) and three of his children - William, Florrie, and his eldest son, Corporal Charles Reeve of the Bedfordshire Regiment.[1] Corporal Reeve was suffering from a wound received at Gallipoli and was allowed out of Hospital for the visit, a sorrowful occasion which ended in tears.

Reeve told his sister that he was ready to die and was looking forward to it, and said to his brother that he had been through so much trouble during the last ten years that he would be glad when it was all over. He claimed to remember nothing of the crime but expressed great contrition, especially for the sorrow he had brought upon his parents and children. One of the warders was a local preacher who spoke to him of spiritual matters, following which he was able to say “I understand much now, and I am prepared to meet my Maker. Do not have any fear; I am prepared to go.” He recognised the evil effects of strong drink and wished to warn others against it: “If there is one thing I would like to do before I go it is to go back to Leighton and tell the people in North End to leave the drink alone”. His last letter to his parents, to whom he had given custody of his two youngest children, reads:

My dear Mother and Father,These are the last lines of your broken-hearted son. Don’t worry about me, for I am quite prepared to die, and I am certain I shall be happier where I am going, - far happier than I have been for years. I have put my trust in God. Dear father and mother, I am truly sorry for the trouble and disgrave I have brought you to. You know I was driven to do what I did, but that is done with now and I am prepared to meet my Maker. I hope and trust my children will be a help and a blessing to you. Give my love to all my sisters and brothers, one and all, also Mrs. Peasegood and Miss Peasegood, Charlie butcher and John Dimmock. I have made it all right for my children. Tell my sister to cheer up. I should like to have seen her. Be kind to little Stanley.[2]   Good-bye and God bless you all,      Your loving son, Will

The Chaplain led the way from the condemned cell to the scaffold reading the opening services of the Burial Service, as is the custom. Reeve followed, walking without assistance between two warders. Ellis was the executioner, and death was instantaneous.

[1] Charles survived the war, but his younger brother William Benjamin Reeve (who had been given money to go to the cinema on the day of his mother's murder) died in 1918 aged 18.

[2] Reeve's youngest son Stanley was just four years old when his mother was murdered and his father executed.
Posted by Kathryn at 07:00