A War Trophy for Bedford 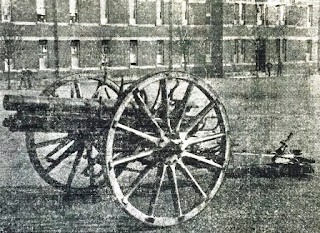 Thursday 18th November 1915: An interesting war trophy has arrived at Bedford in the form of a German field gun captured in recent fighting in France in which the Bedfordshire Regiment was heavily involved. As a recognition of the regiment’s gallantry the gun has been lent to the regimental depot in Bedford. It arrived at the Midland Railway Station on Tuesday. Yesterday morning a company of the 2nd Bedfords marched to the Station and took possession of the gun. Ropes were attached to the gun carriage and it was pulled by a dozen soldiers from the yard. A procession was formed headed by the Regimental Band, which marched along Midland Road, High Street, St. Mary’s, and Cauldwell Street, and so to the Barracks at Kempston. The gun is numbered 2617. The words “Pro Gloria et Patria” are engraved on the muzzle; on the breech end bearing is a crown and monogram “W.R.” with an engraving of an eagle and the words “Ultima ratio Regis”. Although the gun carriage is damaged the gun itself is in perfect condition. This morning the gun was placed for inspection on the Market Hill in the High Street where it is attracting much attention and this morning the Band will perform a selection of music to entertain the crowd.