Luton Lads at the Battle of Festubert 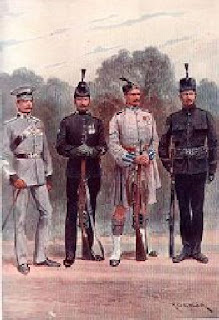 Wednesday 23rd June 1915: Private Percy Smith of Luton has returned to the trenches after being wounded taking part in the charge of the 24th Londons during the the Battle of Festubert on 25th May. A number of local young men had joined this battalion at the same time and were together in the battle. His comrade Corporal Martin was killed while bandaging the leg of Private H. Cook, another Luton lad, who was then dragged into the British trenches. Private Cook’s father recently visited his son in hospital at Bury St. Edmunds where he discovered that his son’s life was saved by Private Smith. Private Cook told him “We lay there until darkness set in, and then I took hold of Private Smith’s legs and he dragged me about 250 yards back to the British trenches, although wounded himself, and we had to get across two ditches”.

Percy Smith lost his hearing and suffered from shock but is now recovered. His parents live in Wimborne Road, Luton, but he was brought up by his aunt, Miss Bleaney of 104, Church Street. Writing to his parents a week after the battle he told them: “I have been moved, as I had anticipated, to our place at Havre. I came up with a crowd of the Bedfords, all from Luton and the villages, I am just as deaf as ever, but more cheerful about it, and fairly fit otherwise. Just imagine for one moment, if possible, an attack in the trench for hours, while several hundreds of guns are sending shells through the air at a terrific rate. It sounds as if the heart of Hell itself has risen up in arms, sounding rough music”.

He went on to describe the aftermath of the charge: “Our pals have gone. By this time the smoke is choking us, and we are covered with blood. Your best pal has died across your chest, pleading for a drop of water. One looks around to see who is hit, but it is difficult to find one that is not … Next morning we are relieved by fresh troops, and the roll is called. A man whispers that So-and-so has gone. Certain officers are missing, and we shudder, and a general murmur of sorrow is heard.”