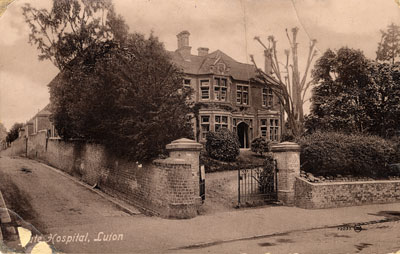 Friday 8th November 1918: Luton has also been hit by the influenza epidemic, leaving local doctors utterly overwhelmed by the large number of cases. All those doctors who have not themselves been taken ill are working from early morning until late at night to cope with crowded surgeries and are able to do no more than issue medicine and general advice. The Luton Medical Officer, Dr. Cox is concerned that this epidemic seems more virulent than the previous one, with more complications brought about by the illness. This has led to an increase in the number of deaths from about twenty a week ago to a total of fifty, all of them adults. Although the effects appear to be less serious in children the schools have all been closed and are likely to remain so for the time being. Restrictions on churches and places of amusement have also been introduced in an attempt to reduce opportunities for infection. About 600 workers have been absent from George Kent’s and about 200 from the Diamond Works due to the illness, but it is hoped that the spread of the disease in industrial establishments has been halted and matters are improving. Dr, Cox has also expressed a belief that the epidemic has now reached its peak and that the number of new cases is falling.