Six Weeks as a Farm Labourer 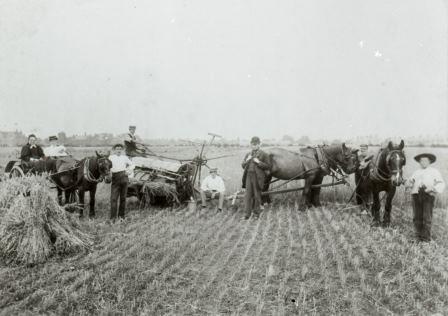 Saturday 30th September 1916: Mr S. A. Kahn, a member of the Inner Temple and form master at Balham Grammar School spent six weeks of his summer vacation working as a labourer on a Bedfordshire farm, intending to study the conditions of work at first hand. He shares some of his observations:


“The first thing that struck me was the bonhomie of the farm-hand. The natural heartiness of disposition so characteristic of the agricultural labourer was evident in every sphere of his activity. Another thing that was a constant matter of surprise to me was his powers of endurance. Probably, none but one who has been bred up to it from his infancy, could stick it. The length of hours, the duration of the cold season, the absence of holidays, and, in some cases, the insecurity of his service, tend to make agricultural work one of the most unpleasant occupations.
After an experience of six weeks’ actual work on the farm, I have come to the conclusion that the hours are too long, and that there are too few intervals for rest, in hoeing, and twitching. I go even so far as to say that if the hours were shortened, the same amount of work would be done. It is no secret to the farmers that the men are obliged to ‘take it easy’ at times. I cannot blame them … Much nonsense has been talked about the women on the farm. I think that the life on the farm is not so easy as some of them think. The woman is not suited for it, simply because she has not the stamina and the strength to sustain a work of that nature. The experiences of some of the women working on the farm have not left a pleasant impression upon my mind, and the testimony of the farm hands upon this topic is conclusive.
The third thing that struck me was the economic value of the agricultural labourer’s wages. I had heard so much of the agricultural labourer’s hard lot, that I determined to investigate the point upon the spot. After much inquiry, I have come to the conclusion that the £1 a week which the labourer receives at the present time is equivalent to 35s in London. I need not go into details. Suffice it to say that the labourer is free from some of the most burdensome privileges of town life. I mean the rent, the taxes and th high cost of living. For one of the Duke of Bedford’s excellent cottages he pays only 2s 6d a week. The amount includes rates, etc. A Londoner will pay 10s 6d a week for a small house, with dirty walls, smoky chimneys and crazy structure. Again, the farm hand gets vegetables free; he can pick up as much wood as he requires; and the cost of certain articles is not so high as in London. But the most important advantage of all is the comparative immunity from certain disease that he enjoys. He is not haunted by the spectre of disease, and his vitality and hardiness enable him to resist the onset of many diseases to which a town dweller is heir.”