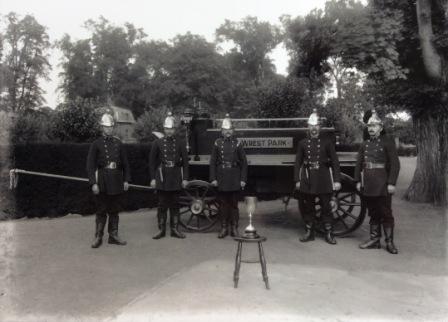 Friday 15th September 1916: Fire broke out yesterday evening in the mansion at Wrest Park, which has been in use as a hospital for wounded soldiers for the last two years. . The weekly fire drill which has been the rule at the hospital proved its worth and thanks to the prompt actions of the nursing staff who evacuated the patients coolly and efficiently there were no casualties.

Tea had been over for about an hour and a half and many of the patients were playing games of tennis, billiards and bowls when the fire broke out at around six o’clock. There were also many patients in bad as sixty more soldiers had arrived only a few days ago. These “cot cases” were in the wards formed from the original dining rooms and libraries running through the centre of the house. The fire started in the chimney of a bedroom next to the roof. The chimney is connected with the main boiler which is believed to have been defective. Sparks ignited the old timbers, causing the blaze to run along the inside of the roof towards the centre dome.

After the alarm was raised the evacuation of the patients took about ten minutes. The estate fire brigade arrived promptly and had at their disposal four 5,000 gallon tanks of rainwater, placed at each corner of the building for firefighting purposes. Ambulances from Woburn Abbey hospital and Ampthill Camp joined those from Wrest in taking the wounded to other hospitals. A detachment of 60 or 70 men from the Haynes Park camp arrived and joined in the efforts to remove furniture from the building, which continued until the early hours. Fire brigades from Ampthill, Shefford, Luton, Hitchin, Letchworth, Bedford, Holloway (London) and Kings Walden arrived to help with the firefighting after a district call was issued, bringing three motor engines, five steamers, and two manual engines. The risks run by the firemen are illustrated by this comment from Second Officer Andrews of the Luton Brigade: “One of our men, Fireman Giddings, had a rough time, and a narrow escape from suffocation. Whilst we were at work on the roof we were driving towards us, but we managed to get him clear in time. You see, the fire was running under the roof where there was a lot of thick lead sheeting, and it could not be seen until the smoke had enveloped us. No, we were not wearing smoke masks.”

Nine rooms on the east side, five at the front, and four to the left of the stairs were affected by the fire, with five or six of these completely gutted. The roof fell in, and part of the lead and zinc dome melted. Where possible the rooms had been stripped of furniture and ornaments, but the carpets could not be saved and considerable water damage was done to most parts of the building. Today Wrest is a scene of confusion, with furniture, bedding, paintings, statues and other articles lying all over the place. Marquees and tents have been set up to store the more valuable books and articles. Fortunately family heirlooms and the most valuable paintings were stored in a strong room which was well away from the fire.