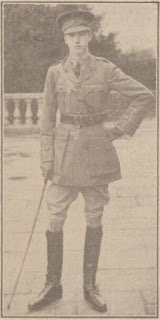 Sunday 17th September 1916: The tragic news has been received at Luton Hoo that Lieutenant Alexander Wernher, the youngest son of Lady Wernher has been killed in France. “Alec” Wernher had been at Eton when the war broke out, and immediately volunteered for service. He was granted a commission in the 2/1 Royal Bucks Hussars in November 1914 when he was just 17 years old. We heard atthe beginning of the year that he had left for Africa on the staff of General Sir Horace Smith-Dorrien. The General fell ill and Lieutenant Wernher returned home to England with him; in his anxiety to see active service he transferred to the Welsh Guards, and he arrived at the Front on 17th July.

During the seven weeks he spent in France Lieutenant Wernher proved himself “brave to the last degree” and won the confidence of his men through his willingness to share discomfort and danger. On September 10th he was wounded in the leg; while being carried from the field of battle he received a second and fatal wound. Alec Wernher’s brother Harold is also serving in France, only five miles from where the young man was killed, and had seen Alec just a week before his death. The Mayor of Luton has sent a message of condolence and sympathy to Lady Wernher on behalf of the Corporation and the town.