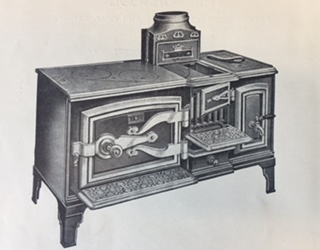 Wednesday 20th September 1916: In the early hours of this morning Luton suffered a devastating fire at the Diamond Foundry, the premises of the Davis Gas Stove Co. Ltd, the second major fire in Bedfordshire within a week. Buildings covering an area of about two acres were burnt to the ground, destroying about half the works, with damage amounting to many thousands of pounds. It is thought that the fire begin at the centre of the range of buildings nearest to the town, in either the gas testing shop or the large stores. The night watchman saw nothing on his round at 2.30am, but by soon after 3.00am it was apparent that the fire had caught hold.

The members of the works fire brigade are equipped with automatic bells in their bedrooms, and these together with the big works bell soon spread the alarm. Although the works brigade soon had water trained on the fire it had too great a hold. Unfortunately the Fire Station were already dealing with a small fire in Lansdowne Road. A motor engine was dispatched to the Foundry with all possible speed, but by this time the whole range of buildings were a mass of flame, with strong winds threatening to spread the fire. “I have hardly seen anything like it,” said Second Officer Andrew, “we simply had to fight our way through sparks”. Thanks to the large amount of water poured onto the site the fire was prevented from spreading to houses in Dallow Road and Clifton Road.

Large amounts of wood in the buildings fuelled the flames, and many of the roofs fell in. The greatest danger came from the petrol and benzene store between the burning buildings and the adjacent houses. The firemen won the fight to keep the flames from reaching this area and the petrol store was saved. Second Officer Andrew said “By dint of cussed hard work we managed to stop the fire extending to the whole works, but, as it was, thousands of pounds damage has been done. The thing that surprises me is that there is any Diamond Foundry left!”  The Fire Brigade are still in attendance and smoke continues to rise from the smouldering debris.

The owner Mr. Davis paid tribute to the fire brigades and told the press: “It is difficult as yet to know the results of the salvage. The stores are gutted, and the fitting shops are down. Yes, we are fully insured. If the wind had been blowing more to the south the fire would certainly have carried the whole works. We were lucky to save a big warehouse, in which lie tons and tons of material”. He anticipates that most of the men will be able to continue to work in the remaining part of the foundry, but that around 200 women are likely to lose their jobs until they are able to rebuild.