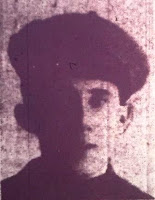 Tuesday 20th June 1916: Two Luton men are now in Russia as part of the “complete and fully-armed British unit” of the naval air service which has been despatched to serve with our Russian allies. On their arrival in the port of Archangel the men marched through the town and were given a great reception by the authorities of the town. Each man was presented with an ikon of Michael the Archangel, they were entertained in the Summer Garden, and the whole city was decorated with flags. At every town they passed through on their journey across Russia the British detachment was met at stations bedecked with flags by crowds of cheering locals throwing flowers, cigarettes and other gifts to the men.

On its arrival in Moscow the British detachment of sixty armoured cars destined for service with the Russian Army was greeted with great enthusiasm. As they marched through the city behind a Russian band to the English church for a short service the men were cheered by large crowds and pelted with flowers. Lunch followed at the British Club, and Commander Locker-Lampson and several others were received by the Grand Duchess Elizabeth. A number of officers attended a performance in the Moscow Art Theatre at which they were cheered for over five minutes. During a march through the town escorted by a Cossack squadron a Cossack officer dismounted and offered his horse to the British Major. The detachment has now left for the Russian front.

Before arriving in Russia Petty Officers Robert Starke and Harry Sell had spent five months in the Arctic , where their experiences must have been similar to those described in March by Petty Officer Albert Hartwell of Bedford. Petty Officer Starke joined up in November 1915 and must be finding life as a driver of an armoured car in Russia very different to his previous life as assistant to the Secretary of the Education Authority. Petty Officer Sell is the son of the Luton schools attendance officer, and also worked at the Town Hall before the war, where he was in the Town Clerk’s office.