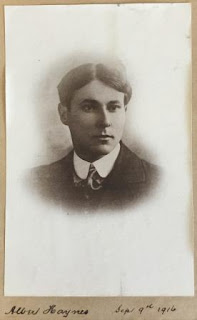 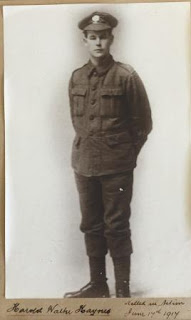 Friday 16th June 1916: Lance-Corporal Albert Haynes, a former teacher at Biggleswade Council School, has recently returned from Egypt to France with the Middlesex Regiment. Albert wrote from Cyprus on route back to Europe with a description of his surroundings: “Here I am at Famagusta, 74 miles by road east of Limassol. We are awaiting the transport to take us to work again. Famagusta appears to consist of two parts. The Turkish village is surrounded by a wall 30 feet thick, inside of which soldiers are forbidden to go. The European or Christian suburb appears very much like an English country village in social character, and it is in fact the cleanest Eastern village I have yet seen. The gardens contain the most beautiful flowers, fruit, and plants, and form the chief item of interest to me. Can you imagine a place where maidenhair ferns grow on the walls and apricots are sold at one penny a dozen? Such is Famagusta.”

Albert Haynes is now in France, just ten miles from his brother Walter who is with the Signal Section of the same regiment. Walter is hoping that he may be returning to England in the near future: “It’s a treat to see the various places on the French country side. I admire the Colonials, who are around here for their true devotion and cleanliness in every way. We have already had experience of their ability in the battle field. There seems to be little indication of us leaving here, although we were told next Sunday’s service would be our last here. I should like to think we were to come directly home from here, but I expect there is a possibility of us going somewhere else to be refitted.”

Two other Haynes brothers are also serving their country, one in France and one in England. Their father, William Haynes, was formerly a Biggleswade Urban District Councillor.[1]