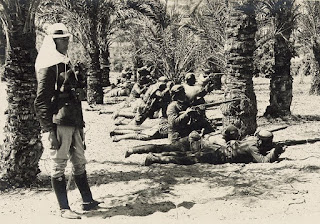 Thursday 30th June 1916: Mr. W. S. Potter, solicitor's clerk to the Leighton Buzzard firm Messrs. Newton and Calcott, is overjoyed to hear that reports of the death of his brother Corporal Nelson Potter were premature. Corporal Potter, who was serving in Egypt with the 1/1st Worcerster Yeomanry, was reported missing after an action on Easter Sunday at Katia on the Suez Canal. His mother refused to believe that her son had been killed and would not hold a memorial service, on the grounds that none of his comrades had seen Corporal Potter fall. Her faith in his survival proved justified when the family, who live in Dudley, received a letter dated May 11th showing that their son is a prisoner of war in the hands of the Turks a Damascus and sent the good news to Leighton by telegram. Mr Potter has since received the following letter from his brother:

"It is no use. You see, I am just like a bad penny - always turning up. This is my first opportunity of writing to you or I would have done so before. We can only write at certain periods, so you must not be anxious if you don't hear from me every week as when I ws in Egypt. I am quite all right, in the best of health, unwounded, and in the best of spirits. I might have been a jolly sight worse off. The Turks are treating us remarkably well. It is a delightful country we are in, and in a month or so, when it is the fruit season, we ought to be 'well away'. Don't worry; I have been worse off many a time."