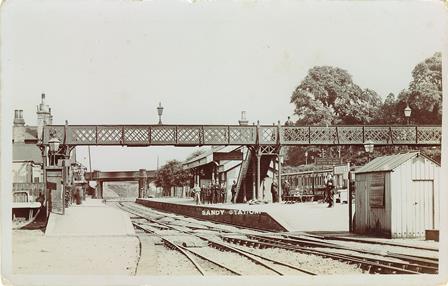 Monday 6th December 1915: Richard Hemmaway, a driver employed by the Great Northern Railway was killed today while driving a goods train from Peterborough to London. Christopher Maidens, the fireman on the train, said that all went well until the train was about a mile from Sandy, when Hemmaway got on to the tender. The train was travelling at about 20 to 25 mph when they passed under a footbridge at Low Field in Everton and he heard a crack. When he looked up he could not see Hemmaway. He climbed onto the tender step and saw the driver lying with his head against the lid of the tank. He stopped the train and whistled for the guard. On examining Hemmaway they found he was dead. The driver knew the track well and Maidens thought that he must have gone to look in the tank to make doubly sure of the water – they could not get water at Sandy and would have to whistle for the slow line if they wanted to get water at Biggleswade. The guard, Patrick O’Connell said that when they found the driver lying dead on the top of the tender they went on to Sandy as quickly as possible and placed him in a waiting room. There he was examined by a doctor who found a fracture to the upper part of the cervical spine and two lacerations at the back of the scalp. Death must have been instantaneous. Richard Hemmaway was a married man with five children; he was 49 years old and lived at New England, Peterborough. He had worked for the Great Northern Railway for over 30 years been a driver for nine.

This was the second rail accident at Sandy in just three days. On Saturday Private Frank Reynolds of the Norfolk National Reserve Regiment who are stationed at Sandy was carrying water across the London and North-Western Railway Bridge over the Great Northern Railway in Cambridge Road, Sandy, when a train due to arrive at Sandy at 9.07 a.m. overtook him before he reached the south end of the bridge, catching him on his right arm. A doctor was summoned and found his arm to be badly cut and bruised He was taken to the Red Cross Hospital at Beeston where he is making good progress.