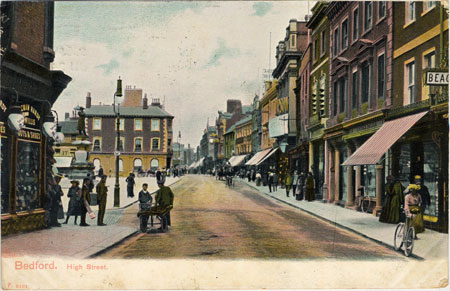 Wednesday 8th December 1915: The Bedfordshire Times has asked its readers to shop early for Christmas, saying “To ‘Shop Early’ is to show true patriotism and to practice the most certain economy.” This year shopkeepers are labouring under unprecedented difficulties. Labour shortages are affecting every aspect of the retail business – production of goods, delivery to and by the shops, and dealing with customers. While most businesses have managed to obtain good supplies it will not be easy to replace these once sold. For example, the toys hand made by the new British toy making industry cannot be produced in the same quantities as the cheap toys previously imported from Silesia. Deliveries are often held up by the uncertainties of the railway system, where goods services are being curtailed due to the shortage of staff.

Shoppers are also being asked to shop earlier in the day. This would take the pressure off shop assistants, who often spend the first hour or two of the day with little to do and are then rushed off their feet for the rest of the day.  If shopping could be finished early in the evening it would also make delivery much easier. Fortunately small purchases are now generally being carried home but heavier and bulkier items still need to be delivered. The lighting restrictions now in place make it very much easier and safer if the shop vans can start their rounds earlier.

An anonymous Bedford shopkeeper has expressed his gratitude for this plea. Shopkeepers are finding it considerably harder to buy goods than to sell them. Seasonal parcels are often two or three months behind schedule, and goods handled in London or Manchester often take a fortnight to reach Bedford.  If customers shop early as far as possible matters will run far more smoothly and it will be to their own advantage to obtain their Christmas wants well in advance.