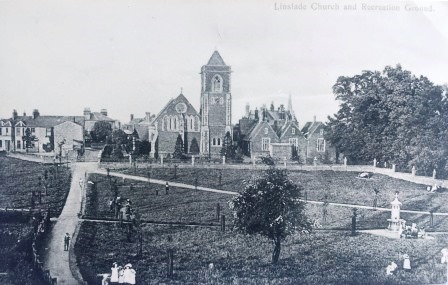 Monday 6th September 1915: At Linslade Petty Sessions this morning Private Arthur Basil Bradney of the 16th Service Battlion of the Middlesex Regiment was committed for trial at the Buckinghamshire Assizes next month on a charge of false pretences in cashing a fraudulent cheque at the Hunt Hotel in June. The hotel proprietor, Mr John Holmes was approached by Bradney in the paddock adjoining Bossington House on 15th June. Bradney told Mr. Holmes he was staying at the house and was a great friend of the occupants, the Jacksons. Holmes agreed to cash a £5 cheque for him and did so later the same day at the hotel. The cheque was subsequently returned by the bank marked “No account”.

Mrs. Alice Mary Jackson of Bossington House said that she had met Bradney at Broadstairs about four years ago. On June 15th he came to her house in uniform saying he was on leave and had come to see her. He stayed for tea and dinner and left before 10 o’clock. At one point he had been left alone in the morning room, where her cheque book was either in a drawer or on the blotting pad. A few days later she received a communication from the bank and discovered that the cheque produced in court had been taken out, along with the counterfoil. Before leaving the house Bradney had left her his name and address on an envelope. Nurse E. M. Swaine, who was employed by Mrs. Jackson said that the next she had met Bradney in Leighton Buzzard and he had returned to Bossington House with her for lunch. He was again left alone in the morning room for a short time. When he left in the afternoon she had accompanied him as far as the Hunt Hotel. The National Provincial Bank, Piccadilly, stated the bank had no account in his name.