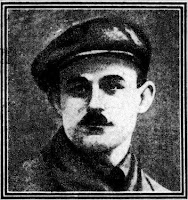 Thursday 23rd September 1915: The people of Bedfordshire have been asked to keep their eye out for two German officers who escaped from Donington Hall near Leicester last weekend. It is believed that they left Derby on a Midland train heading south. A £100 reward has been offered for information which may lead to their arrest.[1] The two men are described as follows:

[1] The two men were arrested at Chatham on September 23rd. Lt. Otto Thelen proved a persistent escapee; in September 1917 he made a fourth bid for freedom [Source: Daily Mirror 27 Sept 1917]
Posted by Kathryn at 07:00

Email ThisBlogThis!Share to TwitterShare to FacebookShare to Pinterest
Labels: Germans, prisoners of war