If a Shell Comes - It Comes! 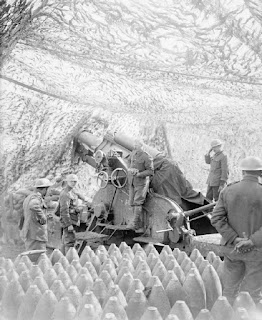 Sunday 12th September 1915: Luton Modern School Old Boy 2nd Lieutenant Claude. G. Hyde of the Royal Garrison Artillery has written describing his work at the Front and the routine courage of his men:

“I have a battery of Trench Mortars and consequently belong to the far-famed “suicide club” or “trench mortuary” brigade as we are called out here. I suppose we have been given these names on account of the pulverising we get from the Bosch whenever we fire, but from all I have seen it is the infantry who get the reprisals. We fire our designated number of rounds and then clear out. … At present I have my guns trained on a wood which affords cover for innumerable German machine guns and “Minenwerfer” and they are evidently getting rather uncomfortable. Our mortars fire two kinds of bombs – an 18lb bomb for long ranges and a 33lb bomb for short ranges. They do a lot of damage. When the heavy guns in the rear bombard the German lines we take up the tune and play on their barbed wire entanglements. It is jolly fine sport, spotting and putting out their machine guns and blowing up their saps. But the Germans are most conscientious workers. It does not matter what damage is done to their works, they always begin repairing them at night, keeping on until we drop a bomb amongst them as a sort of gentle hint to discontinue their labours and to retire to rest.”

“Every Tommy out here is essentially a “fatalist”. If a shell comes – it comes! And if your name and number are written on it, it will catch you wherever you are. This is their creed and it seems to be pretty sound, considering the marvellous escapes of some and the unlucky accidents to others, and it perhaps accounts for the extraordinary deeds that one sees done practically everyday, the most dangerous work being carried through in the most cool and nonchalant manner. People at home do not realise the adventurous existence of the British Tommy out here.”[1]


[1] 2nd Lt. Hyde was subsequently wounded at the Battle of Loos, but was able to return to active service before the end of the year.
Posted by Kathryn at 07:00