Recipes of the Week 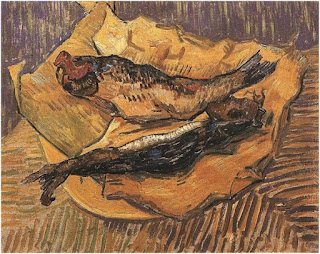 Bloaters on a Piece of Yellow Paper, Van Gogh (Wikimedia)

Friday 24th September 1915: Local housewives looking for inspiration in the kitchen may like to make use of the following recipes:

Tomato Rolls: Remove the skins and cores of six large tomatoes and mash with a fork. Add a few spoonfuls of minced ham, onion, and a little seasoning, the crumb of a stale roll dipped in milk, a few drops of tarragon vinegar, and the yolk of an egg, and mix well together. Then shape the mixture into rolls, dip into egg, roll in crumbs and cheese mixed, and fry in fat crisp and brown. Garnish with fried parsley.

Stewed Vegetable Marrow: Chop finely an onion of medium size, cook it very slowly in a little butter or fat in a saucepan until nicely browned, then add a roughly cut-up marrow. Cover and cook very gently for a good half-hour, or until the marrow is soft enough to be mashed with a wooden spoon. Stir in fine breadcrumbs until its consistence resembles that of mashed potato, and season to taste. Cold marrow may be reheated in this way, or marrow that breaks when over-boiled may be strained and finished off as directed.

Bloater Fillets: Skin two large bloaters, split them down the back, remove the fillets from the bones, place on a gridiron over or before the fire, and broil until nearly tender, dipping them first in oiled butter and then in grated Parmesan cheese. Have ready some neatly-cut slices of hot buttered toast, place a fillet on each, sprinkle with a few fried breadcrumbs, and put in a very hot oven for a few minutes.

Email ThisBlogThis!Share to TwitterShare to FacebookShare to Pinterest
Labels: food