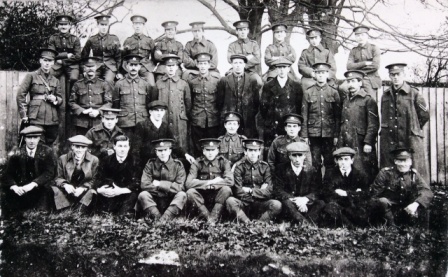 Tuesday 21st September 1915: Sergeant Arthur “Tich” Lancaster of the East Anglian Royal Engineers, a prominent member of the South End Club in Bedford[1], was wounded taking part in the new landing on the Gallipoli Peninsula. He has written to his friend Mr. E. Thompson from a hospital in Malta:

“I was ‘winged’ on the 1st September. We were putting up wire in front of the Indian trenches at the time. We had one chap laid out as soon as we started, but we got the job finished all right, and I was just getting back into the trench when a bullet broke my leg just above the ankle. We were all lucky to get back alive, as we were only about 200 yards from the Turks. I had a rough journey down to the base; it was about five miles through the trenches, but I got there all right. I was in a hospital ship for four days, and was then sent on here. I think my leg is going on all right now, but it has been bad. The doctors were afraid I should lose my foot, but they cut my leg about and put tubes in it, so I think the worst is over – at least I hope so. This is a very nice hospital, and we are looked after well; I can lie in bed and look out to sea. I have been on milk diet until today, now I am on chicken.”

[2] Arthur Alfred Lancaster had joined the East Anglian Royal Engineers in 1908. He army service record notes “wounded in action, compound fracture left leg” and he was repatriated on 31st October 1915. He recovered sufficiently to continue in the army and was re-engaged for four years in April 1916. However his discharge record in 1919 recorded that he suffered from 50% disablement due to leg and eye injuries.
Posted by Kathryn at 07:00