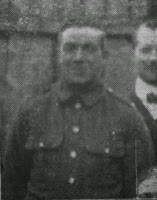 Monday 12th July 1915: The Biggleswade Chronicle continues to collect funds to send food parcels to local men who are prisoners of war in Germany. While this week’s subscriptions have been less than last weeks they still amount to a good sum, and in clude 6s 6d from the Biggleswade Providence Strict Baptist Sunday School and £1 4s from Master Willie Battson. In addition Private Charles (“Tich”) Carr has sent money from the Front Line to pay for a picture to be sold on behalf of the Prisoners of War Fund. Three of the men to whom parcels are being sent are at the Altdamn Camp. This camp has recently featured in the national press following a report by a visitor from the American Embassy. For their midday meals the prisoners receive a thick vegetable soup and raw pickled herrings. Unfortunately while the Germans and Russians enjoy these they are not to English tastes and there has been some trouble on this account. During the winter the soldiers had been able to cook their herrings over the barrack fires; now that the weather is too warm for heating some of the men have been punished with solitary confinement for lighting fires to cook the fish contrary to their captors' orders. The American visitor was able to explain that the English did not eat raw herrings and the commandant has agreed to make safer cooking arrangements – he had previously thought the fire making was merely a matter of insubordination.

One of those men detained in the Altdamn Camp is Private Alfred Bowskill of the 2nd Bedfords. Twenty two year old Private Bowskill is the son of Mr William Bowskill of Church End, Arlesey. He has served with the Bedfords since Christmas 1911 and returned from South Africa with his Battalion at the outbreak of the war. He was taken prisoner during the First Battle of Ypres and was taken to Altdamn, where he at least has the company of another Arlesey man, Percy Papworth. Three of Private Bowskill’s brothers are also serving in the Forces: one is a stoker on a ship now in the Dardanelles; another brother, James, is at the Front with the Grenadier Guards; the third brother, John is with the 5th Beds Territorials.[1]

[1] A John "Boskill" appears on the Arlesey War Memorial. It seems likely he was this Bowskill brother. The other members of the family seem to have survived the war.
Posted by Kathryn at 07:00