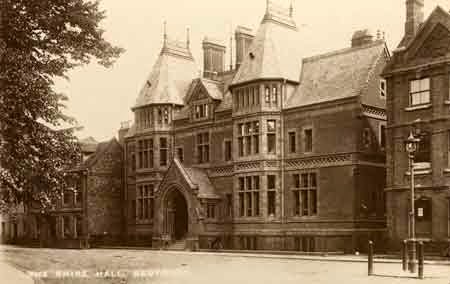 Wednesday 28th July 1915: A meeting was held this afternoon at the Shire Hall, Bedford of engineering firms from the five counties Bedfordshire, Hertfordshire, Buckinghamshire, Huntingdonshire and Cambridgeshire to discuss the production of munitions. The meeting was called by Mr Samuel Whitbread in response to a letter he received recently from the Minister of Munitions. Bedford was chosen as the location as Bedford and Luton were probably two of the largest centres for engineering work and Bedford had good railway facilities. A general committee of twenty two representatives was elected and a decision was taken to call the area the South-East Midlands Munitions Area. An executive committee was also appointed which subsequently elected a Borad of Management.

The meeting was informed that the government’s greatest need is for big shells. Those firms with facilities to do so were told they should concentrate on these, leaving the manufacture of smaller shells to those unable to make the larger ones. However, Sir Charles Wilson pointed out that the works in this locality were mostly suited for three inch shells and as the counties involved were primarily agricultural they were unlikely to be able to produced large numbers. A production figure for the five counties of 1,000 shells a week was thought to be reasonable. One of the men nominated for the committee said he was a paper maker and knew nothing about engineering; although he wanted to do all he could for the country he was not sure he was the right man for the job! A representative of High Wycombe in Buckinghamshire, a town renowned for chair making, suggested that local firms in his area would be best employed producing wooden boxes to hold ammunition.