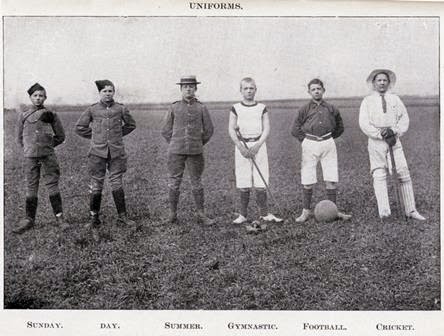 Wednesday 14th July 1915: The 120 boys of the Bedfordshire Reformatory School at Carlton are leaving today to camp in the Park of the Duke of Buccleuch near the village of Weekley in Northamptonshire. The boys have already had good experience of route marching and are intending to march the whole way to Kettering, with an hour or so rest at Wellingborough. They are expected to arrive around teatime. While at camp the boys will be given the opportunity for graining in drill, gymnastics, marching and sleeping under canvas, which will be particularly useful for those who will later join His Majesty’s Forces as soldiers or sailors. Over 130 old boys of the School are already serving at the Front, and nearly 200 are in training with various regiments around the country. Two of those serving at the Front have been mentioned in despatches and others have been made non-commissioned officers. In the country as a whole no less than 19,648 former Reformatory boys are serving their country, with 530 killed in action, 49 died of wounds, and 1,540 wounded. A large numbers of honours have been awarded, with 20 mentioned in despatches, 25 awarded the Distinguished Conduct Medal, and 4 the Victoria Cross.

The general public often imagine a Reformatory to be a dark, unpleasant place. This impression is very different to the one given in this note from the Superintendent:

“To many people the words “Reformatory Boy” sounds dreadful, but visit this school any time during the day, and the surprises found there will be many and pleasant. The school is conducted on public school lines; the boys have eery possible freedom, and the training given them is not to the effect that they are all bad, but have had no chance, or circumstances have been against them. That chance is here given them, for they have the liberty to choose what calling in life they wish to follow, and are trained for it. Boys may be trained as carpenters, tailors, shoemakers, engineers and electricians, bakers, farmers, gardeners, cooks, waiters, bandsmen (for Army and other bands), short-hand-typiest, etc. The premises are roomy and up-to-date, and to use an expression of the Chief Inspector of the Home Office Schools, “It is one of the best-arranged and most comfortable of Reformatory Schools.”

Government statistics show that the school has an excellent record of turning out useful and successful citizens, with 92% of old boys doing well and in regular employment.