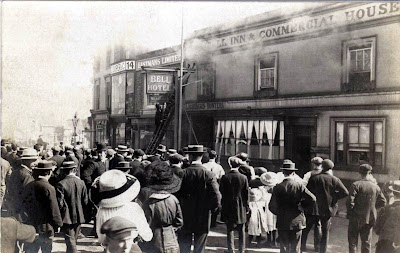 Saturday 3rd July 1915: News has reached us a former pupil of Beaudesert School at Leighton Buzzard has become the youngest recipient of the Distinguished Conduct Medal [1], an award for conspicuous bravery second only to the Victoria Cross, at the age of just sixteen[2]. Rifleman John (“Jack”) Pouchot of the Queen’s Westminster Rifles won the DCM for his gallant conduct in trying to the save the life of a wounded comrade. A corporal went out at night to collect water but misjudged the time. As he returned dawn broke, leaving his silhouette clear to the German snipers. He was shot while still 50 yards from the trench. Rifleman Pouchot left the trench and crawled to the wounded man who had a terribly wounded face and was gasping for breath.  As he tried to apply the corporal’s field dressing  another comrade, Rifleman Tibbs, joined them. While trying to bandage the wounded man Tibbs was also shot and killed. Pouchot continued to apply first aid until the corporal died and he was ordered by an officer to return to the trench. Aged only 16 - and just 15 at the time he performed his heroic action - Jack Pouchot is believed to be the youngest man in the Army to receive the DCM. He is the grandson of Mrs Mary Holdom of Bletchley and the son of Emily Pouchot, the former landlady of the Top Bell Hotel in Leighton Buzzard who died tragically following a fire at the hotel in 1911[3] [4].

Source: Leighton Buzzard Observer and Linslade Gazette, 6th July 1915
[1] The Distinguished Conduct Medal (DCM) was awarded to other ranks; the equivalent decoration for officers was the Distinguished Service Order (DSO).

[2] The newspaper article describes him as “in his eighteenth year”, but his birth was registered between April and June 1899. As the action for which he won the DCM took place in January 1915 he can only have been fifteen at the time. He remains the youngest ever recipient of this decoration.

[3] Records in the Bedfordshire and Luton Archives include correspondence about custody and access arrangements for Jack Pouchot after his parents separated in 1908.

[4] Lieutenant John Auguste Pouchot, now with the Royal Air Force, was killed on 5th October 1918. His age is given by the Commonwealth War Graves Commission as twenty. It appears from the CWGC citation that after his mother’s death he was fostered by Mrs Edith Hawksford of Kingston-on-Thames.
Posted by Kathryn at 07:00