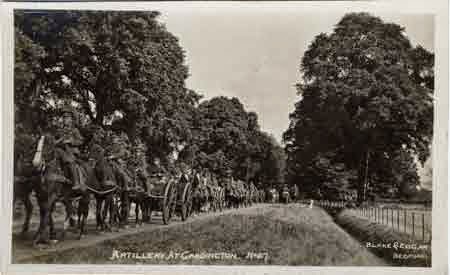 Monday 26th July 1915: An artillery training school has opened at Pages Park in Leighton Buzzard and large numbers of men from the West Riding Territorial Artillery are arriving for training. Twenty reached the town on Wednesday, 230 on Thursday. 250 more yesterday, with further arrivals expected imminently. Their horse-drawn gun carriages are attracting considerable attention in the local streets. The soldiers have been billeted as near to the park as possible in Stanbridge Road, Dudley Street, South Street and the surrounding area. It is expected that Leighton Buzzard will become a large and important training centre. The commanding officer, Lieutenant-Colonel Russell, has applied to the Urban District Council for permission to erect the following buildings: central dining rooms and kitchens, recreation and lecture rooms, harness and saddlery rooms, ablution and bath rooms and latrines for 1500 men. He also homes to get approval from the War Office to add hut barracks for 1500 men and 300 horses. The buildings are likely to occupy 10 to 12 acres out of the 17 acres which make up Pages Park. The Chairman of the Council believed that sufficient water could be supplied, and the military authorities were asked for assurances that they would meet all the costs involved in providing sanitary arrangements.

The opening of the training school opens up the possibility of enlistment for men who have so far been ineligible for military service due to their age or inability to pass the medical examination. They can apply to join the military for home service and are needed to act as officers servants, storemen, grooms and so on. Any many who joins the army and continues to live at home will receive the billeting allowance of 3s 4½d per day in addition to his soldier’s pay; anyone acting as an officer’s servant will be given additional allowances increasing the total weekly wages to between 30 and 35 shillings. Men who enlist for home service fill vital roles and by doing so release younger and able-bodied men for service at the Front. Anyone interested in enlisting can obtain further information from the Recruiting Officer in Market Square.