Death of a Henlow Soldier 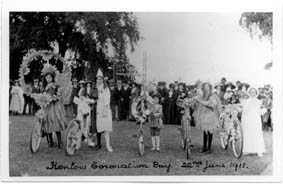 Friday 30th July 1915: A telegram was received this morning notifying his parents that Private Wilfred Jesse Vine has become the tenth Henlow man to be killed since the outbreak of the war. He was serving in the Chatham Battalion with the Royal Marine Brigade of the Royal Naval Division when he was killed in action near the Dardanelles on 13th July. Twenty six year old Private Vine was the son of Mr. and Mrs. Frank Vine of the Crown Inn at Henlow. He had bought himself out of the Royal Marine Light Infantry in 1913 and became valet to General Hillyard, the former commander of the British forces in South Africa. When the war began he offered himself for service and took part in the successful retirement of the marines from Antwerp. After his return from Antwerp he married Valentine Farriere, the French maid of Lady Hillyard. He was subsequently sent to the Dardanelles, from there to Port Said in Egypt, and then back to the Dardanelles. He was expected home on leave in the middle of this month, making today’s tragic news even more poignant. Mr and Mrs Vine also have two other sons, Edgar Francis and Bertram, serving in France with the Bedfordshire Yeomanry.