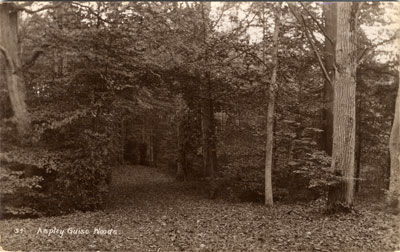 Friday 2nd August 1918: Private Frederick William Brock of the 383rd Motor Transport Company, Bedford has appeared at the Leighton Buzzard Police Court charged with supplying Quaker Oats to German prisoners of war from the camp at Woburn. Private Thomas Patrick Dasey of the Canadian Forestry Corps gave evidence that while he was working in the woods between Aspley Heath and Woburn on 16th July he saw Private Brock, who was driving one of the timber supply motor lorries, take a parcel from his van, carry it about 150 yards into the wood and place it behind some brushwood. Five minutes later he saw a German prisoner, who had been working nearby, fetch the parcel and take it away to where the prisoners were cutting pit props.

Private Walter Croft of the Royal Defence Corps said he was on sentry duty over the prisoners when Brock took the parcel into the wood. He saw the German prisoner drop the parcel behind a heap of pit props; he was 150 yards away, and thought the defendant could not see him. Private Croft reported the incident to Corporal Frederick Smith, who was in charge of the prisoner escort that day. Corporal Smith went to the prisoner and asked through an interpreter what he had received. He said it was bread. When asked to show it he produced a small linen bag with about one pound of Quaker Oats in it. Corporal Smith also found three full two pound packets of Quaker Oats under the prisoner’s cape. He claimed Private Brock had admitted to him having given these to the prisoner, but Private Brock said this was not true – he had said he put the parcel behind the brushwood, not that he gave it to the prisoner.

Private Brock said he had bought the oats at Thirsk in Yorkshire in May due to a problem with rations. He had got tired of carrying them about with him so decided to pack them up and send them away, but found the postage too expensive. He had therefore simply walked out into the wood and dropped them where he expected they would be burnt with the brushwood. There were no German prisoners within 100 yards of the spot, and he did not know what had happened to the oats until the Corporal came and asked about them. When pressed Private Brock admitted that prisoners had asked him to procure things for them, but said he had refused. When asked why he did not give the oats away while he was billeted in Bedford he said it was because he knew no one there. When it was pointed out to him that throwing the food away was as serious an offence as to give it to the prisoners, he claimed he did not know what else to do with it.

An officer from the prisoners of war camp said there was reason to fear that this kind of thing was happening more often than it should, and that it tended to make the prisoners get out of hand. The Chairman of the Bench took into account Private Brock’s previous good character and sentenced him to three weeks imprisonment.