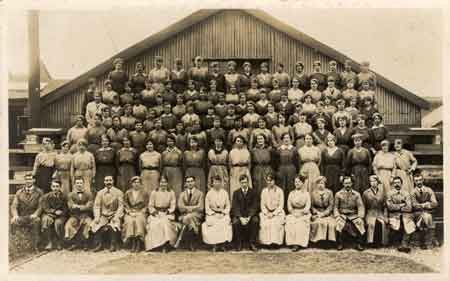 Wednesday 31st July 1918: At the Luton Borough Police Court today Marie Burnand, a Frenchwoman who is employed at George Kent’s works in Luton, and whose husband is serving in the forces, summoned another employee at the same works for using insulting language. She gave evidence that George Marsh, a 46 year old discharged soldier of St. Ann’s Road, called her a German, and said she was a spy and that her husband had gone back to Germany. On July 20th he had kicked the wheel of her bicycle on Farley Hill and created a disturbance. She resented this abuse as she was French and her husband was fighting for his country. George Marsh said he was sorry he had been in company in a public house, but alleged that Mme. Burnand had also created a disturbance. He was sorry if he called her a German. This was George Marsh’s 31st appearance in court, and he was known to be a violent man. As his last appearance had been in 1915 he was treated leniently and bound over for six months, with an order to pay costs.