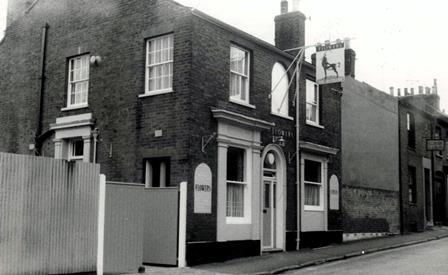 Police Sergeant Janes told the court that he found Gustavus Streeton between the landing ceiling and the roof of 57 Albert Road, and that the prisoner admitted desertion. On behalf of the military authorities Captain Miller asked for the prisoner to be detained until they could ascertain to which unit he belonged. He had been a deserter for two years. The pass, a discharge certificate which belonged to Folks, was found in Streeton’s possession. He at first said he had been given the certificate by Folks, then that Folks had dropped it while visiting his house and he had later found it on the floor.

Folks pleaded not guilty to allowing the form to be in the possession of another person. Inspector Janes said he had interviewed the defendant and asked him to produce his discharge papers. He brought downstairs a parcel of papers including a Territorial discharge and said “I had another one here”, but could not find it. He then said that about a week ago he went to mend Streeton’s bicycle, and the paper must have been taken from his coat pocket. He claimed not to have seen Streeton for two years until the police arrested him; after the obvious inconsistency with the bicycle story was pointed out he refused to answer further.

Streeton then gave evidence that he had been at Lilley a fortnight ago, on the road to Luton, when he met Folks. They sat down by the roadside and Folks took out his discharge papers from his pocket. He left one on the bank, Streeton then picked it up and kept it until he was arrested. Captain Miller told the court that although it may not be local knowledge, there was considerable trafficking in discharge papers. It was a dangerous and unpatriotic practice, and required severe penalties. Streeton was fined ten shillings or seven days, and Folks was fined £6 or two months’ hard labour. The elder Mr. Streeton admitted concealment but denied obstruction. He knew that if his son was sent back he would suffer very severely as a deserter on draft for the Front. Gustavus Streeton senior was fined £1.