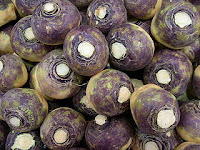 Tuesday 28th May 1918: Farmer John Dancer of Leighton Buzzard has appeared today at the Petty Sessions charged with permitting foodstuffs to be wasted. Proceedings were taken at the direction of the Ministry of Food. The Beds War Agricultural Executive Committee arranged a routine inspection of Mr Dancer’s farm at Heath and Reach on March 12th, and found a very large quantity of swede turnips lying about in fifteen small heaps, each containing about 1½ cwt of the vegetables. Mr. Dancer stated that he had pulled the turnips last November and covered them with leaves, but had not put any earth on them. Many were found to be frost bitten, and at least half were useless as food for either man or beast. Two other witnesses confirmed the poor state of the turnips, with one in no doubt that it was “simply the result of sheer carelessness”.

Mr. Dancer said he took the farm ten years ago and it was managed by his son William. He had heard that turnips kept better in small quantities and were not affected by cold or wet. Both he and his son thought the best way to preserve them was to cover them with leaves. However, another farmer, John Hopkins, stated that the best way to keep swedes was to cover them with dirt. Two other witnesses spoke on Mr. Dancer’s behalf. Walter Mills said he had bought some of Dancer’s turnips to feed to his pigs and none were bad. Another farmer, Arthur Syres, had also bought some of the swedes and their condition was “very fair for the time of the year”. After some consideration the Bench found Mr. Dancer guilty and imposed a £5 fine.