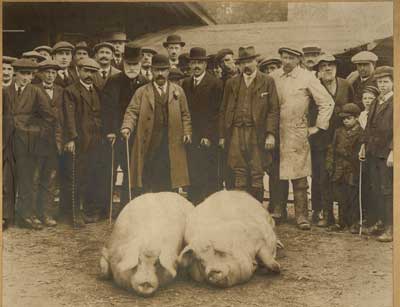 Thursday 23rd May 1918: A pig raising scheme in operation in the Queen’s Park area of Bedford is looking extremely promising. The Queen’s Park Pig Club began with a meeting held on March 19th to discuss setting up a society for the purpose of buying, breeding, housing, feeding and fattening pigs, with each member to receive a share of the bacon produced. Twenty members contributed some capital, and during the Easter holiday they built two large pigsties with brick floors in Quenby’s field, off Bromham Road. Alongside the sties they also put up a building for storing foodstuffs, with a copper for boiling the feed. The idea rapidly became very popular, and within four weeks of the initial meeting the Club had acquired seventeen pigs and had around sixty members, many of whom are employed at the Queen’s Engineering Works.

On joining the club each member pays £3 to cover the cost of buildings and the purchase of pigs. There are already plans to build four more sties, each with a sleeping apartment and a forecourt. Members pay a weekly subscription towards the cost of feeding and looking after the pigs, including the services of an experienced pig-keeper. A collecting tank has been bought and swill is to be collected from the Club members’ houses and from the Allen Institute. The Club has also reserved a plot of ground on which to grow food for the pigs. Manure produced by the pigs is to be sold to the members at a nominal fee, which will no doubt benefit their allotments. Liquid manure is being collected in a sump, so that nothing is wasted. A member of the Club is a well-known local butcher, who will provide advice and experience when necessary, and it is proposed to insure the pigs. Each member is expected to receive half a pig in the autumn. Any profits from surplus meat will be used to replenish or increase the stock of pigs.

Proposals have also been made for a  Pig Club for the east side of town. This club proposes to set a minimum membership of sixty. The cost of building sties is thought to be prohibitive, but premises suitable for fifty pigs are available to rent. At the current time another forty names are required to make the scheme viable.