A Tragic Boating Accident at Bedford 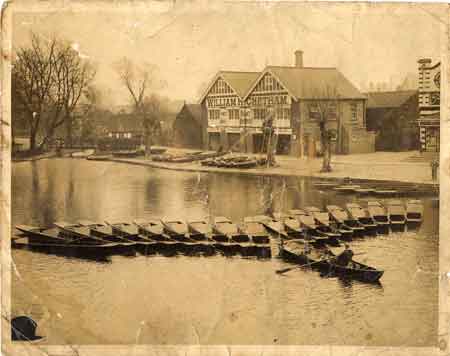 Monday 6th May 1918: An inquest has been held at the Bedford Police Station into the tragic deaths of Cadet Malcolm Peter McLachlan of the Royal Engineers, and Winifred, the sixteen year old daughter of Mr. E. A. Gilbert of 7 Offa Road, Bedford. Thomas George Cox, waterman for Messrs Chetham, told the inquest that the young people had hired a three-seated canoe from him at 8.30pm on Saturday. Cadet McLachlan took the stern seat, the young lady the seat in front, and the front seat was empty. Both were paddling the canoe. The river was normal, perhaps a little faster than usual, but boats had been out all week. About twenty minutes later he heard that two people were in the water and took a boat out. He found the canoe had floated across to the opposite bank, the right way up but full of water. The paddles were floating some yards away, and the backboards and cushions had been picked up by a punt.

Mrs. Huckle of 10, Pilcroft Street stated that she was walking along the path through the Cattle Market when she saw the couple in a canoe. The lady leant forward as if reaching for something, the boat swayed and tipped over, and both occupants went into the water. The girl was not holding a paddle and the gentlemen was not paddling – they were just letting the canoe float. After the canoe capsized the young man first went for the canoe, but let go when he saw the girl go under. He brought the girl to the surface twice and tried to swim with her to the shore. She clung round his neck and they went down together. They surfaced one more time before disappearing. Four other boats were nearby. A sailor and two civilians in one laughed and passed on. Two soldiers in another boat could not swim, but tried to look for the couple. The other two boats rowed away.

Charles Hartwell, a waterman, saw the accident from the Cauldwell Road walk. As he entered the Bridge the young man was standing up in the canoe, which was going very slowly. and the young lady was sitting. He insisted that his recollection that the young man was standing was accurate, although it disagreed with the previous witness’s statement. He though the young man must have lost his balance, as he sat or slipped down on the side of the canoe, tipping it over. He said there were “ever so many” boats on the river at the time. The man made for the canoe, the canoe rolled over, and that was the last he saw of them. He shouted to some people in a boat to let him have it to go to the couple, but they moved off. He then sent a young man for the lifebuoy hanging near the bridge, but when he got to the spot with it the couple were gone. He believed if he had the use of a boat he could have saved them.

In his summing up the Coroner said it was clearly an accident. That anyone should be so callous as to be nearby and yet not try help was acutely painful; only Mr. Hartwell appeared to have made any effort. It was one of the most painful cases he had ever had to preside over. The Jury returned a verdict of “accidentally drowned”. The remains of Cadet McLachlan are to be taken home to Bootle in Lancashire by train, with full military honours. Miss Gilbert’s funeral is to be held at Bedford Cemetery on Thursday.