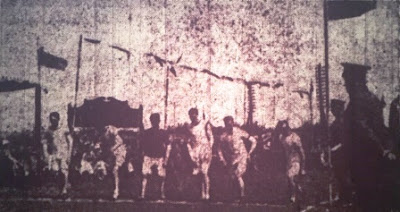 Saturday 17th June 1916: The Dunstable Signal Depot of the Royal Engineers enjoyed splendid summer weather for today’s sports day. The sports were held at Messrs. Waterlow’s athletic ground, at the entrance to the chalk cutting, an excellent venue for such an event. The organisation was very thorough and things went “swimmingly from beginning to end” to the enjoyment of the large crowd of visitors who included the Mayor and Mayoress of Dunstable. To add variety to the sports comic entertainment was included. A very overgrown boy and girl, made up “in the most ludicrous manner” featured in the children’s races, and “Charlie Chaplin” made an appearance. The highlights were a comic policeman riding a bicycle and a “one man power” motor car which was accompanied by a few “apre sparks” in the form of big cannon fireworks.

There were a large number of athletic events, including competitions for the children of the soldiers and of Waterlow’s employees. The depot band also enlivened proceedings with a musical programme; the programme also included a race of an “original” kind for bandsmen only. Sergeant Wells, the brother of a well known boxing champion won the hundred yards flat race, the one mile flat race, and several other events. Much amusement was provided by tilting the bucket, a boot race, an inter-company football match in sacks, a pillow fight on a greasy pole, a bun and treacle race, and an obstacle race. Prizes were presented by Lady Every, the wife of Captain Sir E. O. Every of the Norfolk Yeomanry, and the sports were followed by dancing on the green.