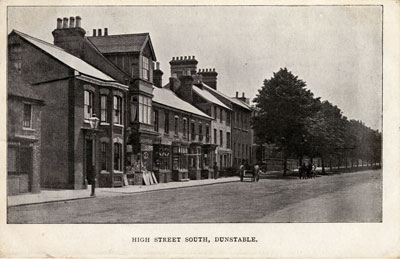 Sunday 11th June 1916: Due to a strange chain of events a young man from High Street South, Dunstable, has been charged at Luton with being an absentee from the Royal Highlanders. Russell Bliss had joined the Royal Highlanders in May and was sent to Perth. After being at Perth for three days he was transferred to the Royal Navy and sent to Portsmouth. When he arrived there he was kept in barracks for three days, without being sworn in or given a uniform. Fed up with this treatment he broke out of barracks. He was arrested by the naval police, but when they discovered he had not been sworn in he was discharged and given a railway pass to Bedford.

Bliss then went home to Dunstable, only to find that his calling-up notice had arrived requiring him to report himself, which he did on Thursday morning. He was sent again to Bedford; the authorities there sent him back to the recruiting office at Luton, from where he was handed over to the police. He was then remanded until yesterday, when the Chief Constable told the magistrates that he had received the following telegram from the Commanding Officer at Perth: “Bliss was accepted by the naval recruiter, and therefore, I have nothing to do with him”. The Magistrate’s Clerk pointed out that he should not be treated as a deserter, as “he has evidently been bandied about from pillar to post. Apparently he is anxious to do something for his country, and no one seems to have helped him”. It was agreed that he should go back to the recruiting office and report himself, and that would be an end to the matter.