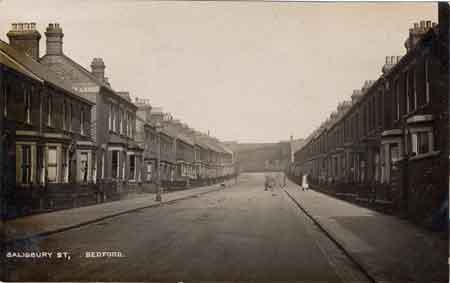 Wednesday 14th June 1916: An inquest has been held at Bedford in the case of Private Joseph O’Neil of the 2/6 Royal Welch Fusiliers who died at his billet at Gladstone Street on the evening of Friday 9th June. The soldier returned to the house at about 10 p.m. A little later the two soldiers billeted there with him heard the sound of a rifle and went upstairs. They found his body lying across a bedroom doorway with a bullet wound through the chest.

Dr. Guy Thornton Birks had been visiting a patient at 68 Gladstone Street when he was called next door to number 70. He found the soldier lying on his back at the point of death, to which he succumbed shortly after. Dr. Birks found a small bullet wound near the man’s breastbone. There were no signs of scorching on his clothing, so the shot could not have been fired close to the body. A rifle was lying parallel to the man’s left side. He believed the wound must have been inflicted while Private O’Neil was standing as some plaster had knocked out of the wall at chest height, possibly by a bullet. He thought it was possible the man had fired the rifle himself and had then moved a foot or two.

Private J. Davies of the 2/6 Royal Welch Fusiliers said he had known Private O’Neil for 18 years, and  they had been at school together. Private O’Neil had been a carter, was about 32 years old, and came from Liverppol. They were both billeted in Gladstone Street, together with Robert Owens. He had seen Private O’Neil on parade that day, then again at the Kent Arms in Salisbury Street at about 7.15 p.m. He appeared to be sober. He heard the rifle shot at 10.20 p.m. and found the dying man in the room he himself shared with Private Owens – Private O’Neil often used their room because his own had no gas. He did not notice the rifle at the time. He ran downstairs and told Robert Owens that O’Neil had shot himself, then went for the Military Police. Private O’Neil had been in the militia for three years but had been in the regular army for only a few weeks; O’Neil  had told him that he did not like the regiment, and would rather be in the regiment he had joined, the King’s Liverpools.. He had seemed very low spirited.

The landlady, Mrs. Jessie Higgins, said the soldiers had been with her for three weeks. She had heard Private O’Neil come in at 10 p.m. She passed him sitting in a chair at the door of Davies’ and Owens’ room as she went to let the other two soldiers in. Davies and Owens went to the kitchen to have their supper. She returned to her room and thought she heard voices from the adjoining room. She did not hear anyone come up the stairs. She heard some rushing about and thought she heard a door bang; then she heard the shot, followed by groans. She went into the room and saw Private O’Neil lying on his back and man standing at the head of the stairs. She said: “Oh, you’ve shot him”, and the man replied “He did it himself.” The man then went downstairs.

The Coroner stated that it was not an easy case. He was not convinced of the reliability of Mrs. Higgins’ evidence, and circumstantial evidence showed it was possible O’Neil fired the rifle himself. In view of the man’s low mood and morose disposition he thought the jury could only conclude that the man had shot himself. A juror suggested evidence should be heard from Owens, but the Coroner thought it would not be helpful. The jury considered Mrs. Higgins must have been mistaken and returned a verdict of suicide.