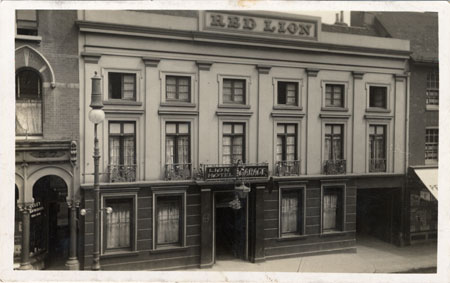 Thursday 29th June 1916: The Central Control Board (Liquor Traffic) has held an inquiry at Northampton Town Hall into a proposal that the counties of Bedford and Northampton should be scheduled as an area by Order in Council. The inquiry lasted eight hours and deputations from the local authorities and representing the licensed victuallers and brewers were heard. In Bedford market last Saturday a petition was signed by 400 farmers and tradesmen requesting the Central Board not to restrict the hours during which intoxicating liquors can be sold. They consider that any restriction will cause great inconvenience and seriously affect the agricultural industry in Bedfordshire. Statistics show that drunkenness in the boroughs and the county has much decreased since the beginning of the war.

If the Order is made it is expected that the hours for indoor consumption on licensed premises or clubs will be limited to between noon and 2.30 p.m. and 6 p.m. and 9 p.m. on weekdays, with the existing hours returned for Sundays but with an evening closing time of 9 p.m. Hours for consumption off the premises would be similar except that sales would stop at 8 p.m. Off sales of spirits would only be allowed during the mid-day period, and then only from Monday to Friday. There would also be a “no-treating” regulation forbidding the supply or consumption of liquor ordered or paid for by a third person. No person would be allowed to treat another, except to a meal, and men would not be permitted to treat their wives with liquor on licensed premises.