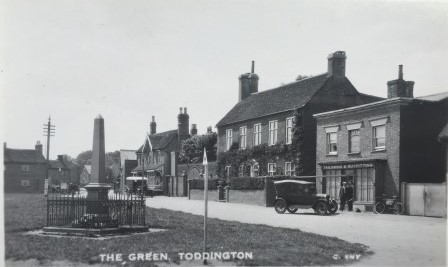 Sunday 25th June 1916: The village of Toddington has had an interesting couple of days. On Friday three companies of Royal Engineers from Haynes Park took part in an exercise with groups arriving at Toddington at various times of the day. The soldiers were billeted for the night in the Wesley Hall and the Rifle Range, and their motor and horse wagons were camped on the Green. They left again yesterday morning. A motor dispatch rider coming round the Leighton Road corner from the Green collided violently with a cyclist named Elizabeth Hucklesby, of Station Road. She was badly shaken and her knee was cut so badly that it required stitches. The dispatch rider was unhurt and was able to continue his journey.

A former pupil of the Toddington Council School, Cyril Hack, is in hospital at Birmingham recovering from wounds received when a bomb exploded prematurely in his trench. He emigrated to Western Canada some years ago and joined the Canadian Forces when war broke out. A number of his comrades were killed in the explosion.