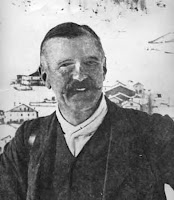 Tuesday 12th October 1915: Major Stevens, the Chairman of the Bedfordshire Territorial Force Association and County Director of the Voluntary Aid Detachments for the county has written to Eastern Command expressing his frustration with confusing and contradictory correspondence he has received, pointing out that “a number of letters addressed to your office on Red Cross work have never been answered, and it makes it most difficult to carry on under these conditions”. It appears that Eastern Command have confused hospitals intended for use only in the event of invasion with others which have been, or still are, in use for sick and wounded soldiers.

An example of the difficulties caused by dilatory and inconsistent War Office actions is the “hospital” at Aspley Guise. A private house was fitted up as a hospital ready for occupation by Dr Fowler [1] at considerable expense. This was offered to the War Office on 14th April. On the 18th April Eastern Command replied to say the offer could not be accepted and that they were unable to issue mobilisation orders for the Voluntary Aid Detachment. After two further letters stating that the place was ready for use and a doctor had placed himself at the hospital’s disposal Eastern Command replied that “The War Office orders are that no more V.A.D. Hospitals are to be taken”. By October Eastern Command appeared to be under the impression that the Aspley Guise hospital was in operation, however Dr Fowler’s offer of the property is no longer open. Understandably Major Stevens is now reluctant to find and staff new hospitals without an assurance that if they are got ready for use he will not subsequently be told they are not required.

Major Stevens has made repeated applications to mobilise the Sandy V.A.D., to which he has had no response; nor have his letters concering the issue of brassards and identity certificates to members of mobilised V.A.Ds. On 16th September he wrote asking permission to mobilise the Goldington V.A.D. which was working as a convalescent home, but never received a reply. The hospital has now been turned into a relief hospital attached to the at . He concludes “I can only end up this rather long letter by saying that the Military Authorities have given us so very little help and encouragement that many of our best members have gone to . We still wish to help in every possible way, and if in your turn you will help us, I am sure that Red Cross work in this County can be made a success, but at present things are most disheartening.”

[1] Dr George Herbert Fowler was a member of Bedfordshire County Council and the founder of the Bedfordshire Record Office (now Bedfordshire and Luton Archives and Record Service, the authors of this blog)
Posted by Kathryn at 07:00