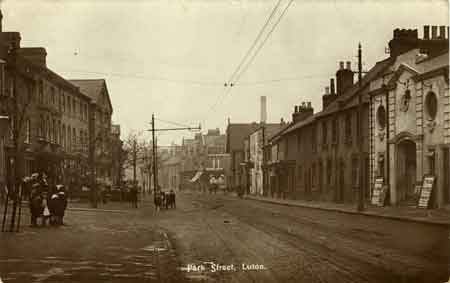 Friday 28th October 1915: Luton Town Council has successfully applied for a Lighting Order and this came into effect last Saturday. The kerbs at corners leading off the main road have been whitened, as have parts of lamp posts and tramway poles to make them more visible to pedestrians. The Rural Dean has given notice to the Anglican Churches that evensong should now start at 5.30 instead of 6.30 and the Free Church Council has also agreed to bring evening services forward to an earlier time. The railway companies are expected to close collections at an earlier hour so that their warehouses can be closed and the lights extinguished.

On Tuesday evening the Council discussed a request by large manufacturers for a time limit to the Order. If lighting up could be allowed until 6pm they could close from 1 - 2pm for dinner, drop the tea hour, and close for the day at six. However, the Mayor believed that the Council did not have any power to vary the Order, which restricted lighting from one hour after sunset until one hour before sunrise. In any case, to allow lighting until six would be very dangerous as it would soon be dark at four o’clock, or even earlier on foggy days, and the enemy would then have two or three hours to strike while the town was lit.


Not everyone has been complying with the Order and steps will have to be taken to compel those who have not fallen into line to do so. Jewellers were said to be setting a particularly bad example, and a number of shops in Park Street were infringing the Order “in the most shameful way”. Numerous complaints had been made to the Town Clerk about one factory, which was “nothing more nor less than a lighthouse beacon to any aircraft that liked to approach Luton”. On Monday night there was one shop in Chapel Street where no attempt had been made to obscure the lights, and while the Wesleyan Chapel was dark the Wesleyan School had its lights full on with no blinds or curtains drawn. The door was wide open allowing light to go right across the street.