A Mountie from Maulden 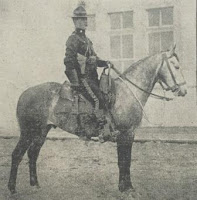 Saturday 30th October 1915: Before the War Corporal Reginald Brown was following an unusual career for a man from Maulden, as a member of the Royal North-West Mounted Police in Canada. When the War began he returned home to England and rejoined his former regiment, the Grenadier Guards. Earlier this year he was seriously wounded at Laventie; after a lengthy convalescence in hospital he returned to the Front. Unfortunately news has not reached Maulden that he is in hospital at Rouen, having been wounded for a second time. It is understood that he is making a good recovery from a shrapnel wound over the right eye. His younger brother, Sam, is also on active service with the Army Service Corps.