Vegetables for the Navy 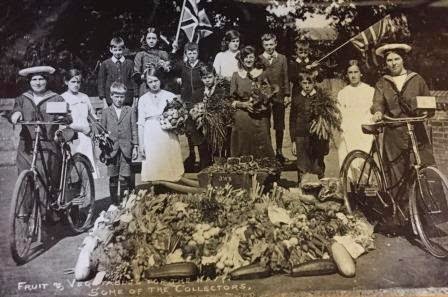 Friday 16th July 1915: Henlow has been asked to join Arlesey and Stotfold in collecting fruit and vegetables for the sailors of the North Sea Fleet. Gifts of fruit and vegetables can be taken to the Vicarage on Wednesday morning, from where it will be taken to the Three Counties Asylum at Stotfold for packing. Produce from Arlesey and Stotfold is already reaching the Fleet and a number of letters have been received from grateful sailors. The skipper of a trawler-minesweeper has thanked Miss Helen Barnes of the Three Counties Asylum for a bag of gooseberries on behalf of his officers and crew. Lettuces sent by two Arlesey girls, Sylvia Allen and her sister, were enjoyed by the happy recipients for tea on the day they were received, and Master Cyril Pinnock of Avondale Terrace has received the following interesting letter from a member of the crew of H.M.T. Gucca:

“Dear Master Cyril, I am writing on behalf of myself and crew of this ship to give you many thanks for the nice cabbage you were kind enough to send us. We have often received vegetables when we have returned to our base, but up to the present have not been able to give the kind friends our thanks, because we have not known where to write, but the steward found your address among the cabbages today so was able to write. We have often talked it over and said we should like to be able to write and thank the kind friends who send us nice vegetables. Well, we are sweeping in the North Sea under very favourable conditions, different to what we had a few months ago. We are not getting a lot of mines at present, only keeping Channel clear by sweeping them daily for the passage of merchant ships going up and down into different ports, but at present we do 12 days out sweeping then have to go back to our base for coal and stores etc. We are eight days out today and are due to go in about the 6th inst. I must say again how grateful we are to you. We had some of the vegetables for dinner today. I must tell you this is my thirty-second year in the navy, and I have never had to write a letter that has given me greater pleasure than this. Trusting this will find you in good health. I remain, yours sincerely, Fred Hand”