Tragic Death of a Young Officer at Houghton Regis 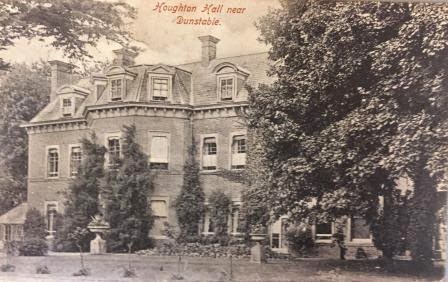 Tuesday 13th July 1915:  An inquest opened this morning into the death of Lieutenant Hugh Anthony Bertlin in a terrible motor accident at Houghton Regis on Saturday. Second-Lieutenant Berlin was riding a motorcycle to Luton but just outside the village he collided with a motor car driven by Mr. P. Jones of Dunstable. Second-Lieutenant J. R. Smith who was riding pillion on the motorcycle was seriously injured. After the crash the two officers were taken to Wardown Military Hospital. Lieutenant Bertlin was diagnosed as a hopeless case and his parents were summoned to come at once; he died at 2 a.m. yesterday morning without ever recovering consciousness. He had suffered a fracture of the base of the skull, severe scalp wounds, and cuts and bruises to the face and body. Lieutenant Smith suffered a fractured wrist, cuts and bruises, but is making good progress. Mr. Jones was not hurt in the accident.

The dead officer’s father gave evidence of identification at the officer. Anthony Bertlin, a civil engineer living at Ealing Green, said that his son was aged 24 and had been living in Canada at the outbreak of the war. He joined the Canadian Expeditionary Force in October and came to Britain in March. He was gazetted lieutenant in the Royal Engineers on 10th April and had been stationed at Houghton Regis for ten days. He reported that his son’s sight was good - he was able to read flag-signalling at a distance of two miles - and he was used to riding a motorcycle. The Coroner adjourned the inquest for two weeks, by which time he expected Lieutenant Smith to be sufficiently recovered to give evidence. Lieutenant Bertlin’s funeral is to take place tomorrow afternoon. He will be buried in the village churchyard at Houghton Regis with full military honours.