Playing Cricket at the Front 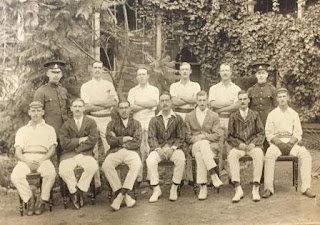 Thursday 1st July 1915: Signaller F. E. Green of 42 Wenlock Street, Luton, has written from France where he is serving with No. 3 Battery of the Lincoln Royal Field Artillery. Even at the Front our boys are finding opportunities for their favourite sports. He describes how on Sunday afternoon they had played a cricket match against the 2nd Battery, who it appears have had plenty of time to practice their batting and bowling skills. Signaller Green says “I am afraid we were hopelessly beaten, but they had the advantage of us in the fact that their team has had practice practically every night for three weeks. Anyway, we had a good game, and hope to give them a licking next time.” On another occasion his battery had played two innings against the “Howitzers” with better success. Not only did they win, but they had a county cricketer – Joyce of Leicester – out for just two runs. Of course, it is not all fun and games. While they play shells scream overhead into the village behind. The soldiers anxiously watch the weather, hoping that the wind will continue to blow in the direction of the German lines and preventing new gas attacks. Signaller Green suspects that a decisive action is imminent as the artillery on both sides is increasingly active. He ends with the news that his battery are about to leave their position, with little chance of finding another with such good cover.