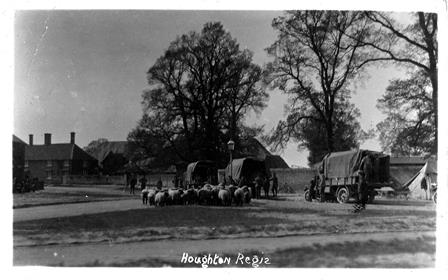 Tuesday 27th July 1915: The adjourned inquest into the death of Second-Lieutenant Hugh Anthony Bertlin at Houghton Regis resumed today. It had been hoped Lieutenant Smith, who was also injured in the motorcycle accident which killed his fellow officer, would be able to attend but the court heard that he could not do so as he was in London to undergo an operation. Lieutenant John Aveling of the Royal Army Medical Corps stationed at the Dunstable Signalling Depot, Houghton Regis, said that he was called to attend Lieutenant Berlin after the accident. He found him unconscious and seriously injured and took him by ambulance to the military hospital at Luton. The resident medical officer at Warden Military Hospital stated the Berlin never rallied or recovered consciousness before he died at 2 a.m. on Monday 12th July. A post-mortem examination showed extensive head injuries. A motor horn battered beyond recognition was produced and the witness stated that these injuries could have been caused by coming into contact with the motor horn.

Frederick Percival Jones, an automobile engineer of Montserrat House, High Street North, Dunstable, said he was driving a 16-20 h.p. Sunbeam car from Luton to Houghton Regis. He knew the road well and was fully aware of the dangerous turning at Houghton. He sounded the horn several times and also used a siren. On rounding the corner he saw the motorcycle about 2 feet 6 inches from the path on the wrong side of the road. He immediately turned his car off the road onto the gravel frontage of the Chequers Inn on the near side of the road, hitting the palings in front of the inn. The motorcyclist appeared to lose control and ran straight into the off side of the car. The horn was at Mr. Jones’ right shoulder, which was where the dead man collided with the car, and he assumed this caused the injury. With the help of some soldiers he took the injured officer to Houghton Hall. Mr Jones said he was travelling at about 10 or 12 mph but eased his pace at the bend, a necessity for a car of that size. He had owned the car for five years and it was in good order. Measurements of the road showed that the car was half on the road and half on the gravel in front of the inn, leaving plenty of space for the motorcycle to pass through.

William Hamson, the landlord of the Chequers was in the taproom when the accident occurred. Going outside he saw two men and a motor bicycle lying in the road. He called out three soldiers who had been playing bagatelle in the public house; they helped him to get Lieutenant Berlin into a car to be taken to Houghton Hall. He took the other injured man into his house. The road was very wide at that point and the car was on its proper side, but he had not heard a hooter or horn. Lieutenant George Harold Williamson of the 2/5th Sherwood Foresters told the Court that the car had passed him going towards Houghton Regis and was travelling very fast round the bend. He estimated the speed at 30mph. After the accident he examined the car’s tracks and said they were in the centre of the road as they came round the bend and continued there for some way before swerving into the near side. He also heard no horn or hooter. Lance-Corporal George Linstead of the Royal Engineers saw the accident from the Chequers and said both the motorcycle and the car were travelling very fast, with the car in the centre of the road. In his opinion anything over 10mph was too fast for that bend.

Police Inspector Frederick Janes went to Houghton Regis on 14th July and saw William Hamson who pointed out three large bloodstains in the centre of the road. The road was 77 feet wide at that point between the fence of Chancery Farm and the Chequers Inn. It was an extremely dangerous corner as drivers of vehicles could not see each other until almost “on top of each other” due to the bends in the road. There was no warning post at the bend. He believed safety would be much improved if a 9 foot tall hedge was cut down to improve visibility. The municipal engineer and borough surveyor of Dunstable, William Fawcett Wilkins, had also taken measurements. Opposite the Chequers outbuilding there were 11 feet clear between the marks of the car’s offside wheel and the grass at the side of the road and 13 feet 9 inches of roadway. Mr. Jones’ counsel pointed out that there was no doubt that the motorcycle was on the wrong side of the road, and that Mr Jones could not have been driving at a very fast speed or the accident would have been even worse and would probably have killed both the motorcycle passenger and the car driver. After considering the matter for quarter of an hour the jury returned a verdict of “accidental death”. The jurors also noted that the hedge which impeded visibility should be cut and a warning post erected.